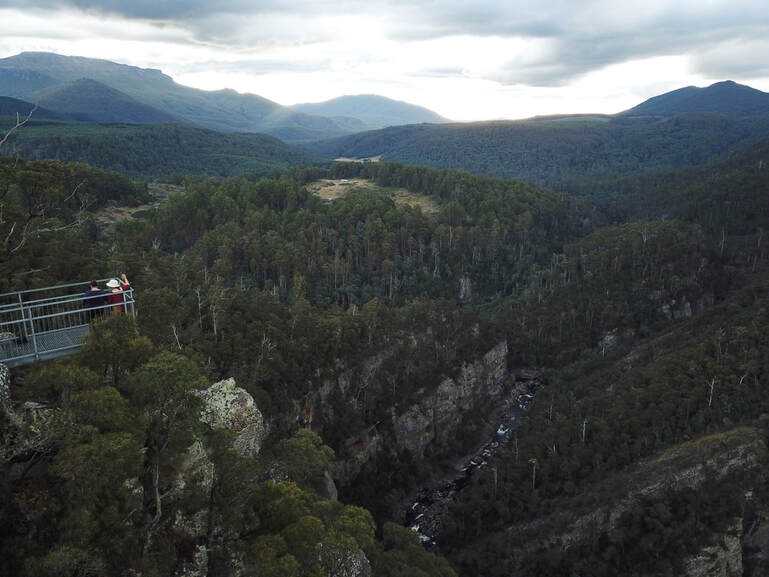 It’s said that if you live in a beautiful part of Tasmania you’re either resigned to its destruction, or you’re fighting government and big corporations in order to save it.

It’s also said if you repeat a lie often enough it becomes accepted as truth – a practice which seems to be the main strategy of politicians and the PR consultants they use on ‘our’ behalf.

When rumour first flew around our Loongana Valley about a 60 metre-wide transmission line easement and 60 metre towers coming through our region, locals’ reactions were predictable – shock, dismay, horror. 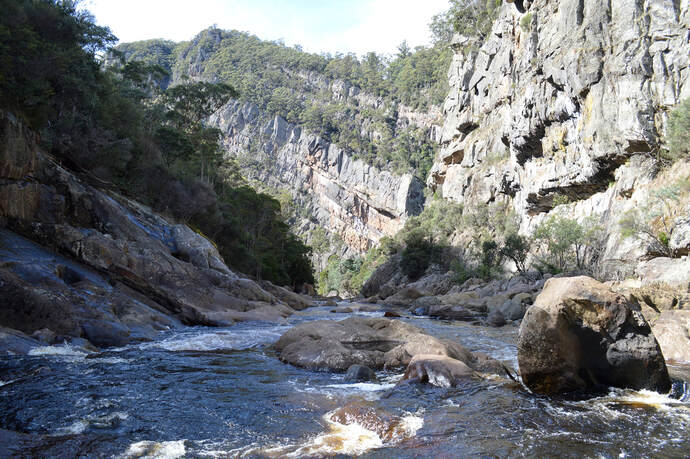 The Leven Canyon Walk
As speculation went into overdrive, we heard about UPC’s proposed wind-farm, and the 170 kilometre transmission line they needed to plug it into the Tasmanian electricity grid.

UPC proposed a route right through the beautiful and iconic Leven Canyon, showing what little regard they had for our region. We pushed back, but couldn’t get straight answers. Politicians stalled, simply repeating UPC’s press release talking points, often word-for-word.

Eventually UPC promised a route change, but after many months of refusing to answer community questions about the route, a leaked map showed it went through Loongana Valley and still directly impacted the Leven Canyon. Nothing had really changed.
Our trust in the process began to erode. ‘Community consultation’ meetings were held, and politicians parroted the corporate PR, but the information we wanted remained secret.

Meanwhile, farmers were being threatened with take-it-or-leave-it contracts – sign over your rights to UPC or we’ll forcibly acquire your land.

Incredibly, the state government had handed these rights directly to a foreign corporation.
Worse, it turned out UPC had only costed the cheapest and fastest transmission line option, ignoring the better options that wouldn’t leave a trail of destruction 170 kilometres long.

We complained, but were ignored by every political party except the Shooters and Fishers, The Greens and the Lambie Network, who at least heard us out. But they, like us, knew nothing more than what was in the corporate and government press releases.
A local attended an insiders-only industry conference and learned more about the wind-power ‘gold rush’ in Tassie – and the tactics some companies were pushing to divide and win over communities along the transmission line in order to access our resources and our grid. As a result, UPC got busy ‘winning hearts and minds’ with community cash-splashes, school visits, sport sponsorships, art prizes and frequent ‘good news’ opinion pieces in the papers.

View from Black Bluff, before and after.
But what we were learning stood in total contrast to the rosy picture UPC and the politicians were painting. Their promise was ‘jobs and growth’ – clean, green renewables would see Tasmania become ‘the Battery of the Nation’. All good, right?

In our community we need more long-term jobs and want action on climate. We want the economic boom that will come when government finally gives coal the boot and a green light to renewables. So wind-farms are something we’re mostly positive about. But the bad news – the reality – kept rolling in. It turns out ‘green energy’ isn’t always ‘green’.

We learned that we taxpayers are basically, via our government and TasNetworks, subsidising UPC. But UPC is owned, funded and directed from off-shore, the energy would largely go to the mainland, and the profits would go overseas. What was in it for any of us Tasmanians? The investment would pay for infrastructure, then what jobs would be left? FIFO turbine maintenance workers and a few locals keeping the easements sprayed with herbicide? 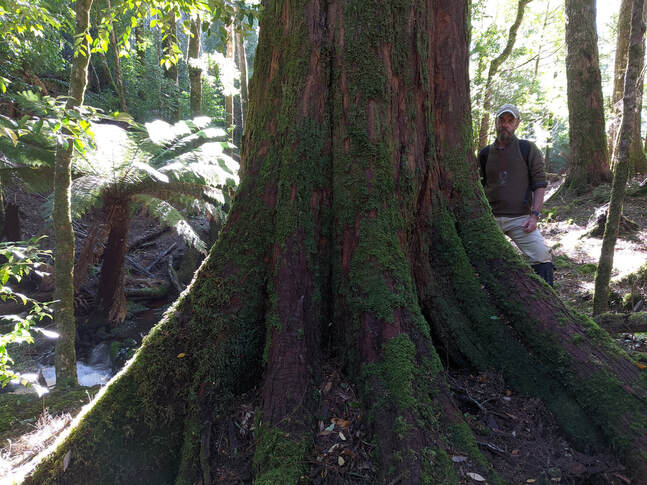 Myrtle rainforest in the proposed easement.
We checked the planning behind it all, and found little more than spin from our elected and appointed officials. TasNetworks’ priority is to accommodate any new power producer, and the state government don’t have an energy or climate policy with more than vague feel-good soundbites.

It’s fine for politicians to aim for ‘200% renewables’ but what’s the plan behind it? How will all sectors fit in and locals benefit? And why are we doing it in the first place? If the government accepts the science on climate, how can it also be backing coal? Why do we here in Loongana have to bear the burden of all of this, see our taxes pay for expensive corporate ‘community consultation’ and yet still have our voices ignored?

The only detailed plan is the one the Australian Energy Market Operator (AEMO) are working on, but neither state nor federal governments are signing up for it – all planning is left to ‘the market’. There’s no coordinated, strategic, multi-sector plan.
It’s exactly what it looks like: parochial politics and mutual backscratching – ‘mates helping mates’

Suddenly, UPC pulled out of the (controversial) section of the transmission line, and TasNetworks stepped in to do it for them, on our dime. Incredibly, Tasmanians are now paying for the quickest and cheapest way to hook UPC to the mainland grid.

We obtained some leaked route maps, only to see that the easement was now 90 metres.

Only later did they admit that the easement would now be the width of a football field with potentially two lines of towers running through our valley.

Even worse, if this project is built, UPC will own the transmission backbone from what the pollies are proudly calling ‘the North West Renewable Energy Zone’. UPC will control what was supposed to be for all Tasmanians, and can lock out competitors who might just provide some of the jobs being promised. Why wouldn’t they? It’s just ‘the market’ operating.

As we learned the tricks being played behind the scenes, TasNetworks and the much-touted ‘Marinus Project’ ramped up a multi-million dollar PR campaign masquerading as ‘community consultation’. Meetings were held, earnest FIFO corporate consultants – expert in massaging the message and soothing concerns – were ‘hearing’ us, ‘engaging with community’, and ‘answering our questions’. The questions they liked they answered with stock phrases we became wearily familiar with.

Other questions they simply avoided answering. We realised they weren’t going to change a damn thing about what they intended doing to us, but each meeting was valuable to them – it added ‘proof’ that their PR consultants were ‘engaged in extensive consultations with community’. 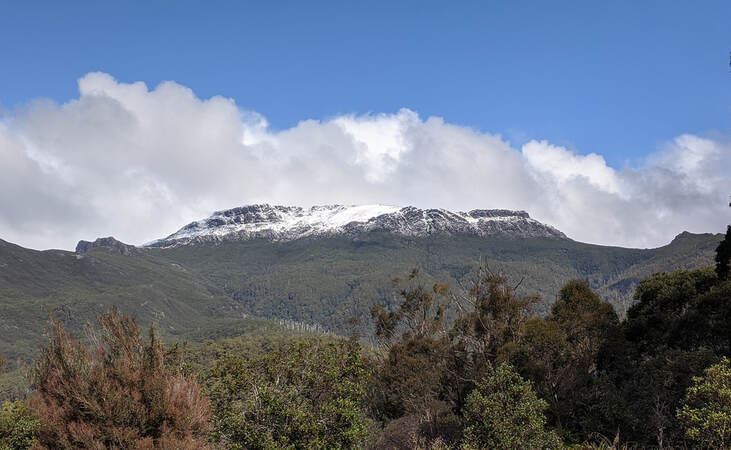 Black Bluff Mountain.
To this day, they’ve never acknowledged the damage they intend doing to our valley or our jobs and lives here.

The ‘Marinus Project’, which was once simply the catchy name for the second Bass Strait interconnector, now means anything UPC-TasNetworks or the politicians want it to mean – the ‘Battery of the Nation’, the ‘Renewable Energy Zone’, ‘Green Hydrogen’, ‘Vital Grid Upgrades’ – and they’re still promising ‘billions in investment’ and ‘thousands of jobs’.

The piece we are largely concerned about here is referred to on the Marinus Link websit (the Marinus site is owned and maintained by TasNetworks) and TasNetworks’ own website rather coyly as ‘North West Tasmania transmission developments‘.
Bottom line: it’s all just to plug UPC’s wind-farms into the mainland grid.

Back in our valley, we’re worried about the costs we are being forced to bear for all this. The valley will be dominated by 45-60 metre towers and an easement that will ‘island’ critical wilderness, separating the forests of the Loongana Range, the Leven Canyon Reserve and the Black Bluff Reserve. The Leven River water catchment, our springs and delicate Karst cave systems will be impacted by herbicide run-off from keeping the easement weed-free.

The easement will dry out the valley and create a wind tunnel, accelerating bushfires, and putting our community at greater risk. Threatened and endemic species will lose out to weeds and feral animals. Iconic tourist views will be industrialised.

Small businesses will see tourists stay away from our valley. None of us can predict how much property value drop we will suffer, and plans for small tourist business expansion are on hold. 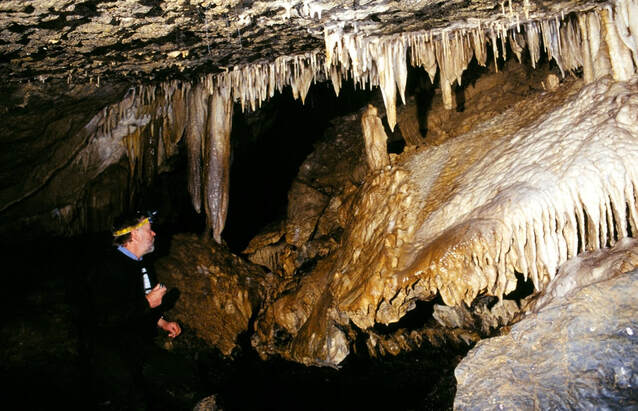 So here we are now – with all hands turned against us. Every ‘stakeholder’ with power is refusing to hear us, or admit there’s no guiding energy and climate policy, or any genuine multi-sector planning, or any community concerns. When asked which Step Change Option in AEMO’s long-term energy-climate plan they subscribe to, neither the corporate sector nor politicians know what we’re talking about. We need jobs and growth, but we won’t get it with press releases and political spin. Why? Because, a failure to plan is a plan to failure.

The bottom line here is that the fight to protect our land and livelihoods in the Loongana valley is also Tasmania’s. If we get steamrollered by the con game happening here, all Tasmanians lose. Why should locals subsidise the heavy costs of corporate profits if we don’t benefit?

Instead of a vital, planned energy sector that looks after Tasmanians first, addresses climate, and only then helps the mainland, we’ll have a mess that helps no one. Long-term, we won’t get cheaper power, we won’t get more than a handful of low-paid jobs, and the proposed mega wind-farms off the Victorian coast will turn UPC’s turbines into white elephants.

What does our community actually want? We want government to go back to the drawing board and do it right. Sack the ‘community consultants’ and actually bloody listen to us. Consult all sectors and ensure the rhetoric about ‘investment and jobs’ is a coordinated plan, not the divisive vote-winning ‘Marinus’ bunkum it is now.

And, finally, we tell you we don’t want UPC-TasNetwork’s transmission line in this region because it puts us at risk, trashes country that supports jobs, costs us dearly, and isn’t needed.

We also need opposition parties and newspaper editors to do your jobs and research the real cost-benefits on this stuff, not operate as a PR service for the government.

Our fight is your fight. Visit our beautiful valley, and walk our trails now while you can – it really is special. One day it will just be another destroyed Tasmanian valley, stolen from us and our kids, and given up to corporate greed and political indifference.

SOLVE – Supporting Our Loongana Valley Environment – is a community group formed to protest UPC-TasNetworks’ unjustified and destructive proposed transmission line, and protect local jobs and the beautiful environment they depend on. They have a website and a Facebook page.

View from Paddy’s Lake, before and after.